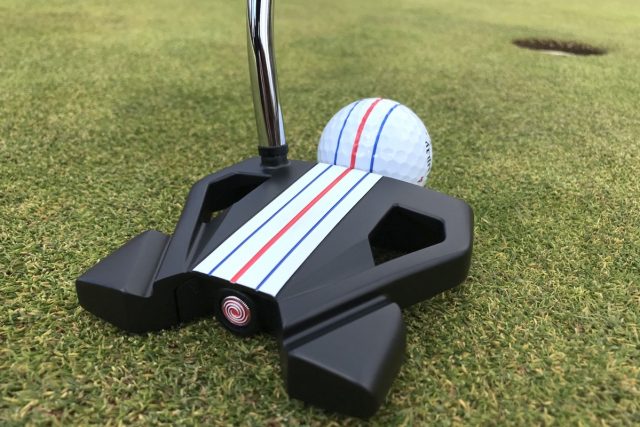 It seems that Callaway has always realized how important putting is to the game of golf. Ever since they launched their Odyssey Two-Ball putter in 2001, the company has done everything within legal, ethical and moral limits to help make putting easier.

New for this year is Callaway’s Triple Track Technology. If you’ve played any of their new golf balls with the red, white, and blue alignment aids on them, you’ll know exactly what I’m talking about. The new Triple Track putters are made to be used with these golf balls; line them up and see for yourself!

In fact, the new Odyssey Triple Track putters were developed specifically from Callaway’s popular golf ball line. Triple Track Technology uses the same visual technology used to land planes on aircraft carriers – Vernier Hyper Acuity. It’s as simple as find the right line, line the ball up along that line, line the putter up with the lines on the ball, make a good stroke and pick up the ball from the hole. That is after you do your happy dance!

The Triple Track technology is not the only new feature Callaway putters offer. Their innovative, multi-material Stroke Lab shaft is engineered to help improve the tempo and consistency in your stroke, producing performance that is nothing short of incredible. The multi-material shaft weighs 40g less than conventional putter shafts, allowing Callaway to redistribute the weight in the head and grip end. A rebalanced putter means better tempo and consistency, two facets necessary for a good putting game.

I’ve only played a handful of rounds with my new Triple Track Ten putter but I must say I am impressed. Warming up on the practice green for the first time with it, I don’t think I missed anything within 10 feet. Being the great range player that I am, that needless to say did not carry over to the first green or any others for that matter. I do feel that it’s now just a matter of finding the right line and taking the putter straight back and straight through. In six rounds with the new Triple Track putter, I bet I’ve shaved off a couple of strokes each round.