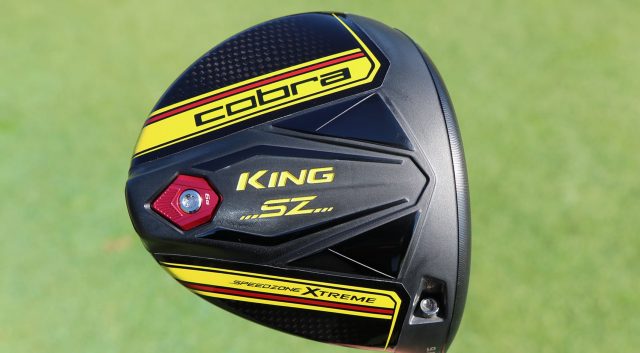 Inspiration for Cobra’s new SPEEDZONE driver comes from Formula 1 race cars. By optimizing 6 different zones on the clubhead to optimize performance, the SPEEDZONE driver lets you know what it feels like to drive at top speed!

Zone 1: CNC Milled Infinity Face. Cobra has increased the milled area on the clubface by 95%, expanding the zone where maximum ball speed is achieved.

Zone 2:  Titanium T-Bar Speed Chassis. This new feature reduces the amount of Titanium that is used and creates a stronger frame that can withstand high-speed collisions while at the same time improving feel and stability.

Zone 3: 360 Carbon Wrap Crown. SPEEDZONE’s carbon wrap crown now covers 50% of the body of the clubhead, an increase of 10 percent. This adds stiffness to the chassis and saves 25 grams of discretionary weight that can be used for other purposes high handicappers need, like increasing forgiveness.

Zone 4: Speedback Weighting. Cobra has been able to position 69 grams of mass as low as possible. This creates the most efficient transfer of energy from the clubface to the ball resulting in higher launch and lower spin.

Zone 6: High MOI Design. Just like the design of a wide-bodied car, the weight has been strategically positioned around the perimeter to improve the stability of mishits so they’ll fly longer and straighter.

As you stand at address You’ll find that the SPEEDZONE has a traditional shape, with front to back CG adjustability thanks to a movable weight. It’s the perfect driver for golfers who like to work the ball and fine-tune launch and spin without sacrificing forgiveness. Hit a few balls with your new SPEEDZONE driver and then be prepared to drive farther than usual to hit it again; this club is long and very forgiving. If you like to work the ball, it’s easy to hit a fade or draw, even with it set up in the Neutral position.

The SPEEDZONE Driver is available in two models: SPEEDZONE and SPEEDZONE EXTREME. EXTREME is geared towards higher handicaps (10 – 25) with added features such as an oversized profile, maximum forgiveness, and a mid-low spin. There’s also a 12-degree loft for those who need help getting the ball in the air off the tee. The SPPEDZONE model has an adjustable weight that lets you customize your ball flight and is geared toward 0 – 10 handicappers.

In the age of artificial intelligence invading golf club design, Cobra’s line of SPEEDZONE golf clubs features an Arccos embedded grip sensor that can be paired with the Arccos Caddie app on your mobile device. The Arccos Caddie app gives you access to golf’s richest data, helping you make smarter shotmaking decisions.

Customization is a good thing and Cobra gives you several shaft and grip options; even more if you want to spend some money. Stock shafts include the UST Helium 4, 5, MCA Tensei CK AV Blue 65, Project X HZRDUS Smoke Yellow (60g) and the Aldila Rogue Silver 60. All of the information you will ever need to make an informed decision on which shaft is right for you can be found on the Cobra Golf website. A Lamkin Crossline Connect Black grip is standard equipment.

Speaking of customization, the SPEEDZONE Driver is available in a couple of colorways: Matte Black/Yellow or Matte Black/White. The same goes for the EXTREME model. Both models retail for about $450.

The next time you’re at your favorite golf store or pro shop, pick up the new SPEEDZONE driver and head over to one of the hitting bays, preferably with a launch monitor. Hit a few balls and compare the distance and dispersion to what you’re currently hitting. I think you’ll be surprised.

For more information or to order the new SPEEDZONE or SPEEDZONE EXTREME, visit the Cobra website at www.cobragolf.com.

Avalon Country Club – Forging a New Path on the Knoxville...