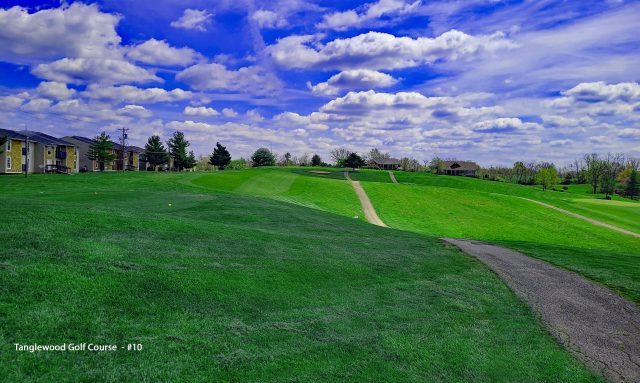 Tanglewood Golf Course is an eighteen-hole golf course in Taylorsville, Kentucky that isn’t easy to find. Unless you’re looking for it, you probably wouldn’t know it’s there but trust me, it’s worth the drive. And I’m not the only one that thinks so. According to General Manager Matt Puckett, year in and year out, groups come to Tanglewood from the surrounding states and the club’s 12 condos and 12 motel rooms start getting booked up for the year by the middle of April. 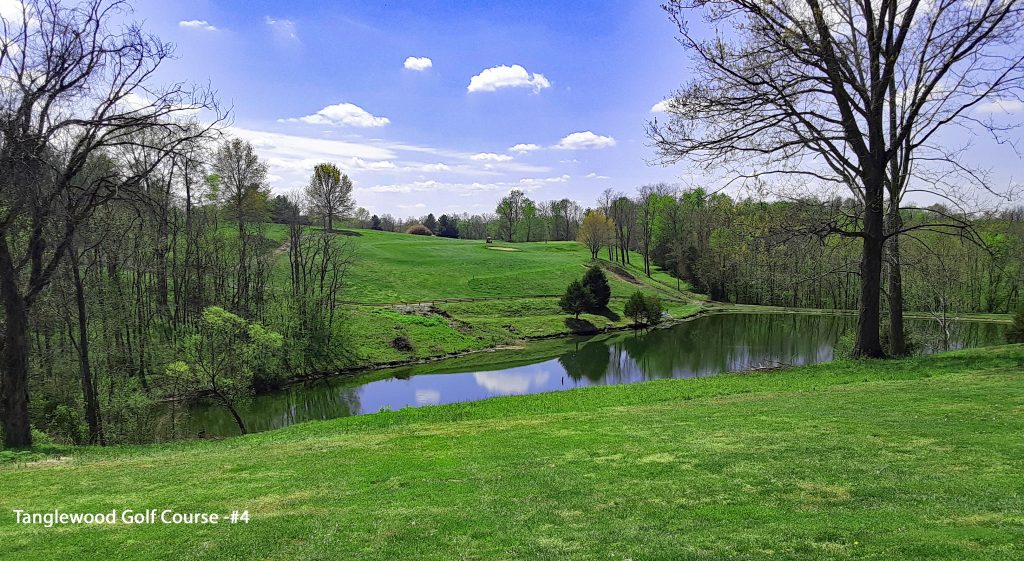 While there may not be a lot of bunkers on the course, the elevation changes and slope in the fairways and greens more than compensates. Narrow tree-lined ryegrass fairways that play along sloped hillsides produce those dreaded uneven lies and ultimately lead to fast, well-manicured Bentgrass greens. You’ll encounter numerous blind shots, so course knowledge is at a premium.

Tanglewood is full of memorable holes. If you can get off to a good start on the first hole, you’ll probably have a good round. It’s long – 431 yards – from the White tees, with a blind tee shot and a semi-blind approach shot. Other than that, it’s a breeze!

Number 4 is an interesting par 4. It’s only 324 yards but requires a tee shot from an elevated tee box, over a deep valley with a pond at the bottom to another left to right sloping fairway. It’s about a 200-yard carry from the tee to the top of the hill. Success off the tee will leave a short chip shot into a shallow green. 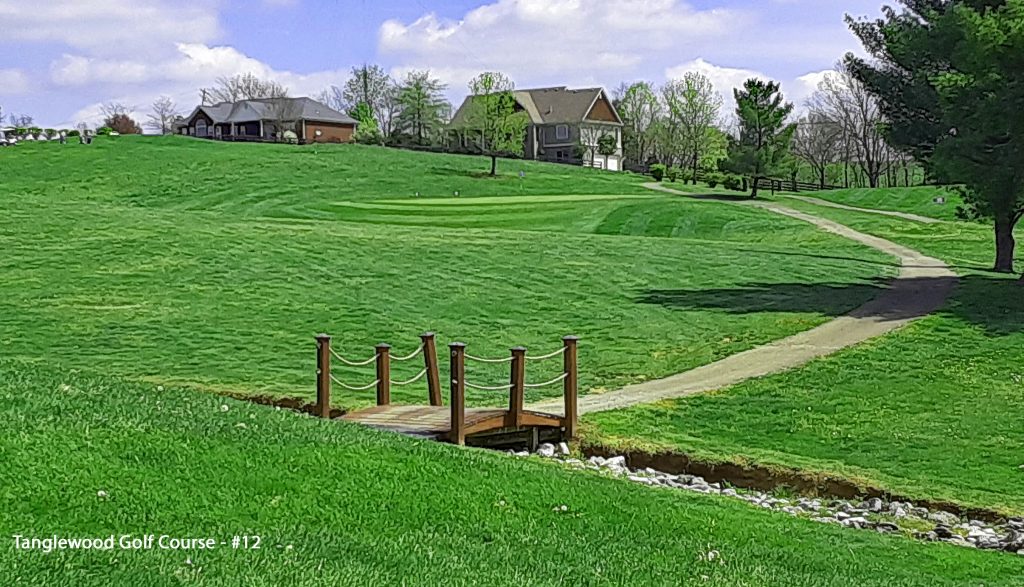 Number 6 is Tanglewood’s signature hole and rightfully so. At 494 yards, it’s a 3-shot par 5 for just about everyone. If I were naming holes, this one would be called “Layup,” because it’s all about the second shot. There’s a lake that sits about 140 yards in front of the green and forces the majority of players to hit a good layup shot which will leave anywhere from 130 – 150 yards into an elevated green that slopes back to front.

Number 8 is a good risk/reward par 4 that plays 287 yards from the White tees. The green isn’t visible from the tees and those large trees you see directly ahead of you are in the middle of the fairway. Anything hit off the tee that goes past the 150-yard markers will make it difficult to get your approach shot up and over the trees. The other option is to go past them but hitting a driver is a big risk.

Number 10 is a short par 4 (269 yards) is a risk/reward hole that begs long ball hitters to go for it off the tee. If there’s any doubt about reaching the green. Hit an iron off the tee. Everything slopes hard left to right, and if you hit it right, pars can be tough to come by! The green slopes back right to front left. 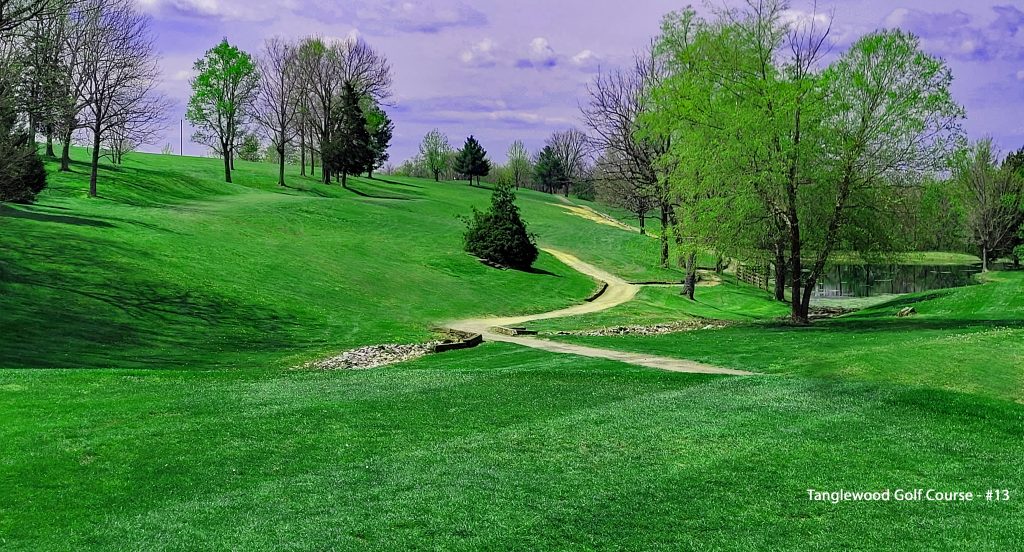 Holes 11, 12, and 13 define Tanglewood. Play these three holes at par or better and you’ll likely post a good score when all is said and done. You’ve probably played here before too! Number 11 is a 396-yard par 4 that is the course’s #1 handicap. It’s a very slight dogleg left, and the green is not the one you see in the distance; it sits below the second hill and behind the pond. A good drive will still leave a blind mid-iron shot into a green fronted by a small pond. The right side provides a bailout area and leaves a slightly uphill chip shot. The green slopes left to right and can make for some interesting putts.

Number 12 is the longest par 3 at Tanglewood and because it plays uphill, it’s slightly longer than the stated yardage of 215. Anything that comes up short is going to leave an uphill pitch shot. The green slopes back to front, so anything over the green can leave a tricky up and down.

I found Number 13 to be the most intimidating tee shot on the course. Off the tee, there appears to be little, if any, landing area. The fairway slopes dramatically left to right. If you’re a longball hitter, consider hitting your tee shot left and playing down the

adjacent fairway. It’s not traditional but it worked for me! Find the fairway off the tee and you’ll need to play your layup shot to the left, again, to compensate for the sloping fairway. That will leave a short, slightly downhill chip shot into a large green that slopes modestly from back to front. Miss the green on your approach. Hard to believe it’s handicapped #7.

Number 18 is a fun finishing hole and a good chance to get a stroke back on the last hole. It’s an uphill dogleg left that plays 278 yards from the White tees, over a pond. A good drive will leave a short pitch into a small green and a chance to at birdie with a good chip shot.

Tanglewood taught me how to deal with blind shots, especially approaches into the green. What I discovered is that when in doubt, hit less club. There isn’t a lot of water to deal with and most of the “trouble is on the peripheries and behind the greens. Coming up short isn’t a bad thing; you’ll keep the same ball in play. I’m sure I would feel differently if I played the course regularly. 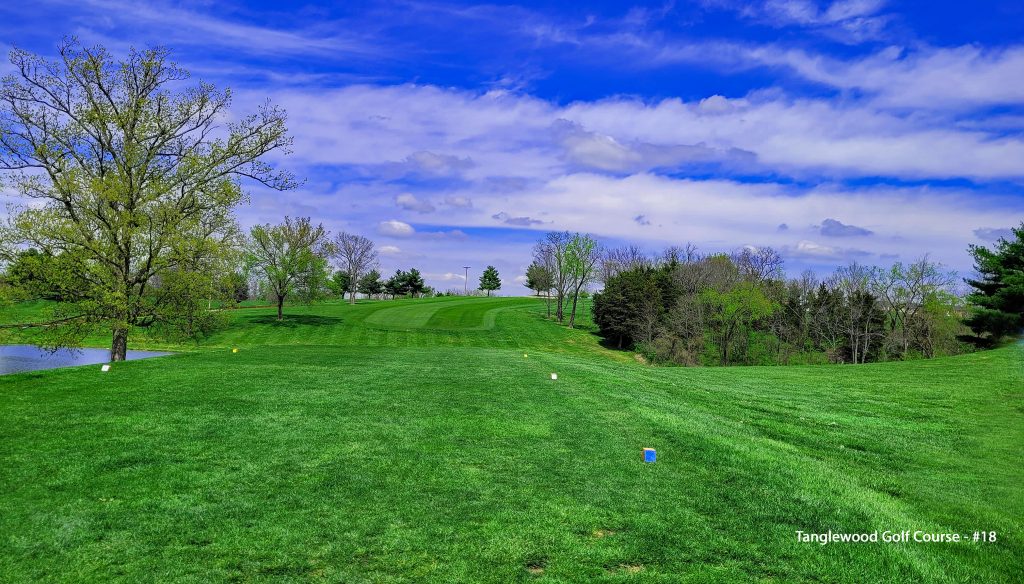 Tanglewood is centrally located and within two hours of three major metropolitan cities: Cincinnati, Indianapolis, and Nashville. They offer tremendous stay and play packages with lodging overlooking the #10 fairway and either hotel-style or condo accommodations. Packages start at $220 for a hotel-style room and include 3 days of unlimited golf with a cart and 2 nights stay. Condos start at $250. Tanglewood offers all guests a $10 breakfast buffet as well as buffet-style meal plans that feed groups for $10 per night. Small appetizers are available in the full-liquor bar.

Tanglewood also offers some incredible membership rates. For example, you can play 7 days a week with a golf cart for $1400/year. If you average 10 rounds a month for 9 months, that’s a little over $15.00/round. For more information, visit their website at www.golftanglewood.com.