Birmingham Alabama has a lot of options for golfers, both residents, and visitors. There are nearly 40 public, private and municipal courses within a 20-mile radius of downtown Birmingham, including the infamous Shoal Creek Club, designed by Jack Nicklaus which has hosted a couple of PGA Championships, as well as several courses accessible to the public. Arguably, none are as fine as Ross Bridge and the two championship courses at Oxmoor Valley.

Ross Bridge and Oxmoor Valley are part of the Robert Trent Jones Golf Trail, the largest golf course construction project ever attempted. The trail was the brainchild of Dr. David Bronner, CEO of the Retirement Systems of Alabama whose “build it and they will come” mentality paid off.

The RTJ Golf Trail consists of 469 holes of championship golf on 26 golf courses at 11 sites across the state of Alabama. Some sites have multiple 18-hole layouts, others offer several 9-hole courses. Some are executive-length courses, some will make the best golfers in the world cringe. Some are affiliated with neighboring hotels, some are stand-alone. But one thing they all have in common is that they were designed by Robert Trent Jones, Sr and use the natural topography of the land. Whether you’re playing one of the many championship layouts or a “short course,” all are immaculately maintained! 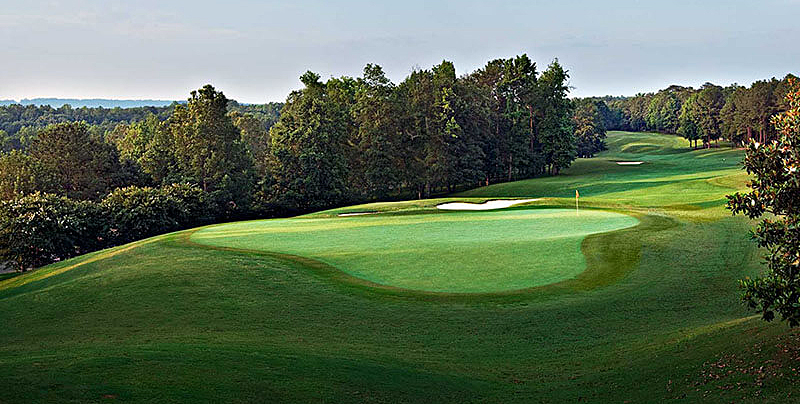 Over the years I have had the opportunity to play several of the RTJ Trail courses and ultimately my goal is to play them all. Ross Bridge is my favorite and has been for many years. From the back (Black) tees, Ross Bridge plays 8,191 yards and is one of the longest golf courses in the world; thankfully there is more than one set of tees. In fact, there are 5 sets of tees offering several manageable distances: Purple (7,446), Orange (6,783), White (6,200), and Teal (5,312). It was cart path only the day we played so we opted for White, not that perfect weather would have made any difference!

The first two holes can either make your day or have you looking for the beverage cart early in the round. Ross Bridge starts you off with one of my favorite holes. The Par 5, 1st hole plays 511 yards and is handicapped #3 for men and #1 for women. The large pond that comes into play on your layup and approach shots creates somewhat of a double dogleg and makes you choose between carrying your layup shot over the water or laying up short of it. Either way, you’re looking at an uphill/blind approach shot into an elevated green guarded in front by two large, cavernous bunkers.

After your uphill climb from the first green to the second tee box, you’ll be happy to know that the 2nd hole is significantly downhill and, from the White tees, Number 2 plays a mere 322 yards. It’s a dogleg left with trees and sand at the corner of the dogleg that can be carried with a good drive. Most players opt for something less than a driver off the tee and play their shot slightly right of the left-hand fairway bunker. It’s a safe strategy unless you hit it too far and go through the fairway. Success off the tee will leave a short pitch into one of Ross Bridge’s smallest greens guarded on the right by sand and left and long by that pond you dealt with on the first hole. Pars or better on both of these holes will have your day off to a great start.

I found The Ridge Course at Oxmoor Valley to be a lot more of a challenge than Ross Bridge, mainly because all of the greens were extremely elevated. The starter told us that if your range finder tells you to hit a 7-iron, it’s probably a good idea to hit a 6! After my approach shot into the first green came up a little short, I too was a believer!

Oxmoor Valley offers 54 holes of golf with two championship courses (Ridge and Valley) and a Short Course. It’s built on mining land that was once owned by U.S. Steel and the holes are sculpted from the peaks and valleys that make up the Appalachian Mountains. As you play your way around the courses, you’ll encounter over 200 feet of elevation changes, scenic forests, and several creeks that you may or may not know are there.

The Ridge Course features roller coaster-like fairways, lots of tree-lined holes, elevated greens, and over 200 feet of elevation changes. Uneven lies are the norm out here. It’s one of the most photographed courses on the entire RTJ Trail and boasts some of the most thrilling par 5s in the state.  Case in point, the Par 5 3rd hole, which is considered by many to be the course’s signature hole. It’s the second of back-to-back par 5s, and it’s best to put

the last hole out of your mind before teeing off! Number 3 plays 506 yards from the White Tees and is handicapped the hardest hole on the outward side. There’s water between the tee and green but it probably won’t come into play until your second shot. Tee off from an elevated tee box and favor the right side of the fairway. Do the same thing with your layup shot but by all means, keep it in the fairway. That will leave an uphill approach shot into a green with an outcropping of rock. Be warned that the green is not as deep as it looks.

Eighteen is an impressive par 5 and is ranked the hardest hole on the golf course. At 543 yards from the White tees, not many players will reach it in two. If they do, they should probably have been playing from the longer tees! Your aiming point is the chimney on the clubhouse. As is often the case on the Ridge course, there are steep drop-offs from the edge of the fairway. Playing your layup shot right of the 150-yard marker will give the best angle into the green which is protected front and right by bunkers.

The Robert Trent Jones Golf Trail offers some incredible Stay & Play packages. The Renaissance Ross Bridge offers golfers the chance to relax in the style and comfort associated with the Renaissance Hotel group. Each room and suite is equipped with elegant furnishings, luxurious bedding, and a private balcony that offers astonishing views of Alabama’s hilly countryside. Whether you’re looking for breakfast, dinner, or something in between, you have several dining venues on the property to choose from including Brock’s, The Clubhouse Restaurant, and JT’s Lounge. Other hotel amenities include a 24-hour fitness center and indoor and outdoor swimming pools. There is also a full-service spa to help you rejuvenate after tackling those monster links.

For more information on these or any of the other amazing properties along the Robert Trent Jones Golf Trail, visit them online at www.rtjgolf.com.

Ford Field and River Club – Living the Lifestyle You Deserve