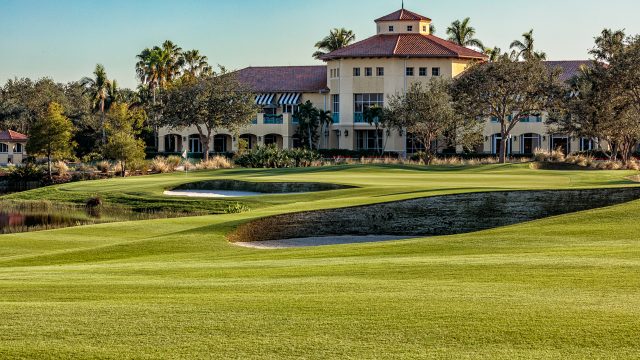 I lived in Fort Myers, FL for a few years and had the opportunity to play the Tiburón Golf Club on several occasions. There were several memorable holes; the finishing holes on each side and the first hole on the Gold Course, a reachable par five. More on that in a bit. Another memory that stood out in my mind about the course was the rough, or lack thereof. As I recall, the grass was the same length, whether you were in the middle of the fairway or rolling off the side into a palmetto bush. Any type of hook or slice – which was my game at the time – usually meant reaching into the bag for another ball. It also led to long rounds of golf; sometimes 4 ½ – 5 hours. Trust me, you didn’t want to be the group behind us!

That was about 7 or 8 years and several sets of clubs ago. A few months ago I had the opportunity to spend a couple of days at Tiburón and play both courses and my, how things have changed! There’s now a cut of rough which defines the fairways as well as areas around several greens where deeper Bahia rough has been recently planted and should fill in nicely before the 2020 season officially kicks off. For my money, both courses are a lot more playable and enjoyable. 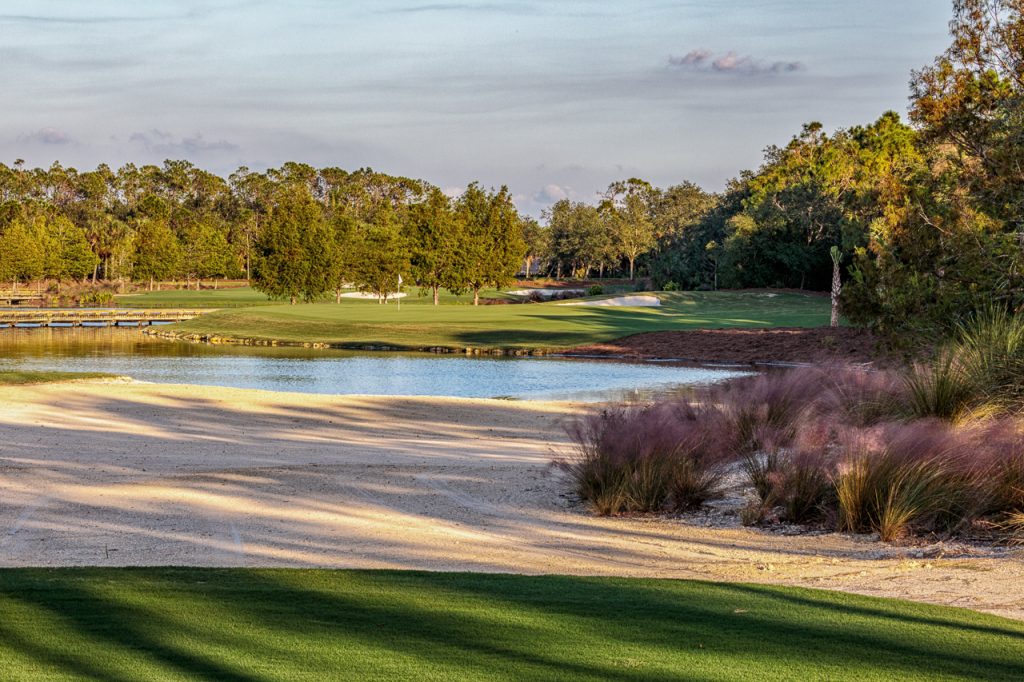 In case you’re not familiar with the property, Tiburón Golf Resort is located in Naples, FL and features two 18-hole, Greg Norman-designed golf courses that are consistently rated among the top 20 golf facilities in Florida by Golf Digest and GOLF Magazine. Each year The Gold and The Black Courses play host to the LPGA Tour’s CME Group Tour Championship and the PGA TOUR’s QBE Shootout (formerly the Shark Shootout). Tiburón – which by the way is Spanish for shark – Golf Club has been designated as a Certified Audubon Cooperative Sanctuary by Audubon International.

As you play your way around either course, you’ll encounter numerous and various hazards. Towering pines form the boundaries on several holes and are often surrounded by coquina shell waste areas. You’ll also need to play around or over water on at least 13 holes depending on how bad you spray it. Many of the greenside bunkers have stacked sod walls which look great and can be very penal, although I hit into one on the 9th hole of the Gold Course and it shot around and out the other side like the high banked ovals at Daytona! 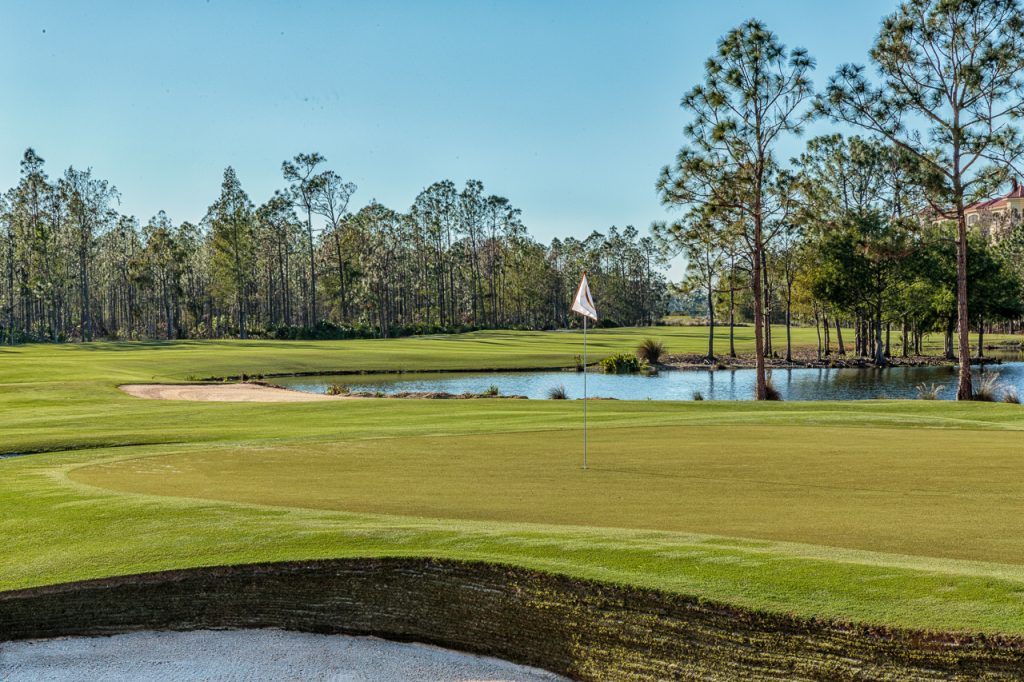 The Gold Course opened in 1998 and the Black Course in 2001. Both courses follow Norman’s philosophy of blending the course in with the natural allure of the land. Tiburón is a semi-private golf club meaning memberships are available and guests of the hotel and the general public are welcome to play. Although Tiburón’s average age is probably in the mid-60s – low for this part of the country – they do cater to a younger crowd by offering Golfboards – a motorized type of skateboard with a golf bag attachment – as an alternative to golf carts.

Of the two courses, the Gold Course is a little over 400 yards longer and can play a masochistic 7,382 yards, compared to 6,949 yards on the Black. However, the slope rating on the Gold is 137 vs 147 for the Black, making it considerably easier. There are enough sets of tees on each course that you’ll find a comfortable yardage regardless of your ability.

The Gold Course opens with a short risk-reward par 5 with towering pines in play the entire hole. The hole doglegs slightly to the right before bending back to the left as it winds around a large lake. A good drive down the right half of the fairway will leave a manageable distance to the green but be warned, the green is surrounded by trouble. 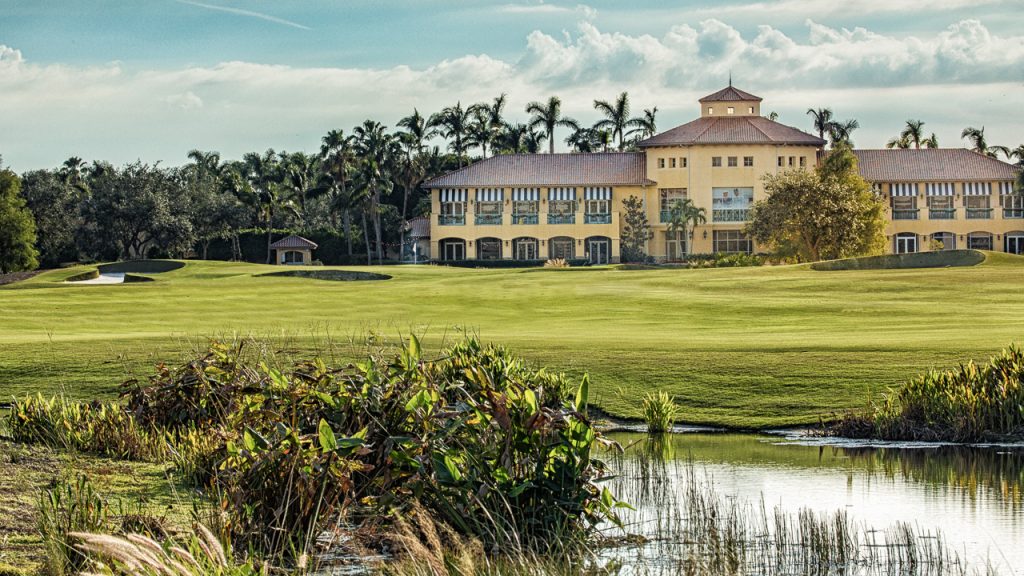 The closing holes on each nine are the most photographed on the course and evidenced by the signage near the tee boxes; the clubhouse and Ritz Carlton are in full view. They are both par 4s, with water in play off the tee on Number 9 and in play on your approach shot to the green on 18. There are also several sod walled bunkers around the green on 18. Par both of these and you’re probably shooting a pretty good round.

The Black Course has a very distinctive look with its pine straw-lined fairways, crushed coquina waste areas and undulating greens nestled amidst acres of pine trees and native Florida foliage. The Black Course offers six sets of tees and is similar in design and beauty to the Gold Course. As you make your way around, you’ll find lush playing conditions and wonderful views. The green complexes can be penal and some of the bunker complexes are massive. Play around your way around the layout without finding a trap and you’ve accomplished something.

The 9th hole is a par 5 that is a three-shot hole for most players. A tee shot that finds the fairway is a great start, but it’s just the beginning. You’ll need to hit a precise second shot, preferably in the middle of the fairway to have the best angle in to the green. Your approach shot will be over a large coquina shell waste area and a lake that protects the left side. Now that you’re skilled at playing over water, you’re ready to take on the par 3, 10th hole, that plays 188 yards from the back tees. A right-side pin placement can be tricky as it leaves only a sliver of green over a bunker. Par both of these holes and you’ve accomplished something! 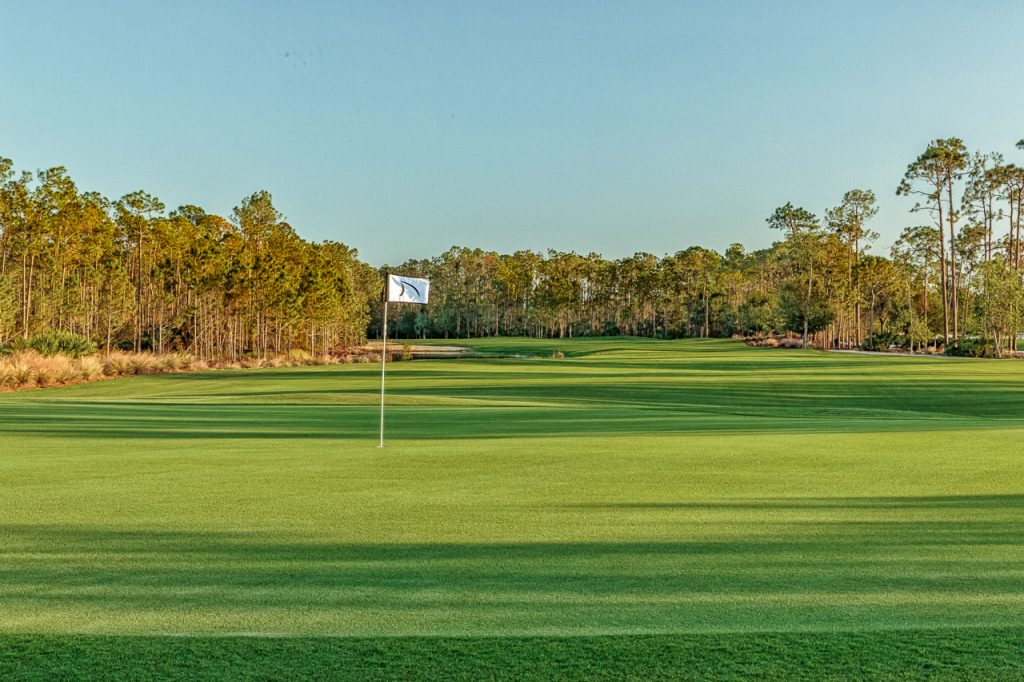 Within Tiburón’s 27,000 square-foot Mediterranean-style clubhouse you’ll find private locker rooms for members with lounge areas and an award-winning golf shop. There are also three dining rooms including Sydney’s Pub, which has a full liquor bar and features daily drink and happy hour specials. They also offer a rotating selection of local draft beers. The non-member dinner menu includes a wide variety of items including meatloaf, chicken pot pie, and braised short ribs. The Ritz Carlton Golf Resort is located on the property as well. As a Tiburon Club Member, you’ll have access to the tennis courts at The Ritz-Carlton Golf Resort as well as the fitness center, pool, and spa.

Becoming a member at Tiburon is easy; they offer several options that will meet anyone’s needs and budget. Medallion, Associate Club and Signature Memberships are available to both residents and non-residents of Tiburón communities and also include the use of Tiburón Golf Club’s Member Concierge Program. The Medallion Membership is by invitation only. There’s also a Preview Membership if you’re not 100% sure, but with everything Tiburón has to offer how can there be any doubt?

For more information on becoming a member or to book your next tee time on either course, visit their website at www.tiburonnaples.com.

Adidas Golf Apparel and Footwear: Doing Their Part To Help The...

Vineyard Vines Golf Apparel Helps You Light Up the Fairways